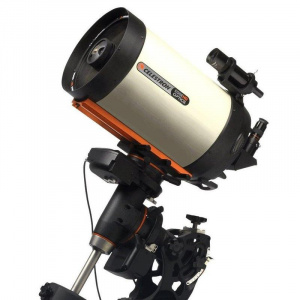 The EdgeHD optical system combines all of the compact power popularized by the SCT with an improved high definition optical system for wide field, astrograph quality images. As a visual instrument, EdgeHD optics deliver pinpoint images even with your widest field eyepiece. You can search for all of the Messier Catalog objects, and see hundreds of other NGC, IC and Caldwell objects with amazing clarity. For astro imaging, EdgeHD optics produce aberration-free images across your favorite CCD or DSLR camera. All EdgeHD optics are designed to produce an extremely flat focal plane precise enough to match the strict tolerances of the largest commercial CCD detectors, allowing stars to be in tight focus to the very edge of the chip.

Included in delivery with the telescope:

In addition to being fully computerized with a database of over 40,000 celestial objects, the New CGE Pro German Equatorial mount has been completely redesign to offer numerous design advantages for the Astrophotographer: